skip to main | skip to sidebar

I could not finish the year without framing the two samplers and putting them on the wall.

For Patches Of Life Sampler, I chose, like Natalie from L'Atelier Perdu who designed the sampler,  a shadow gap frame. 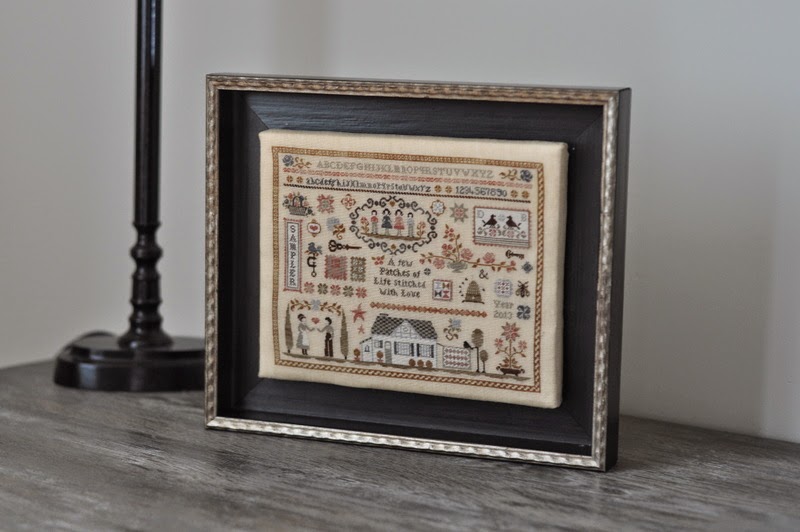 For Tribute To Summer Sampler, I chose a large dark grey/black frame that suited  the pattern well. 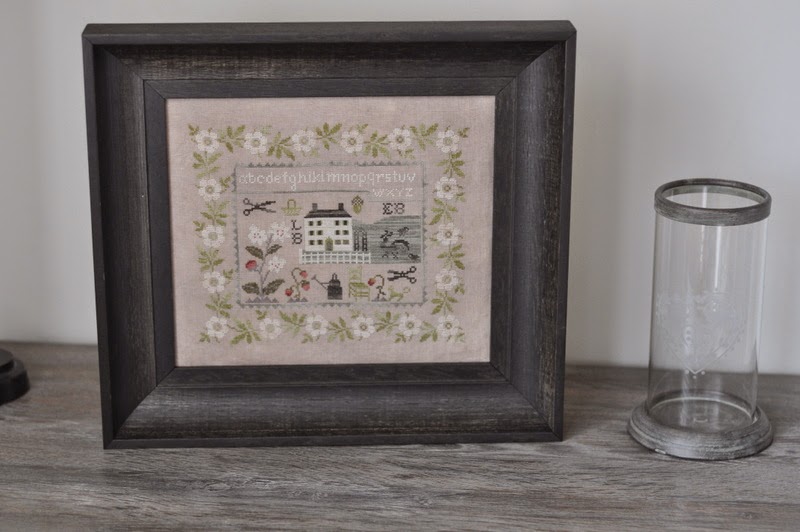 They will not go side by side but this is to give you an idea in the size difference between the two projects which are both stitched on 40-count, over two for the bigger sampler, over one for the smaller. 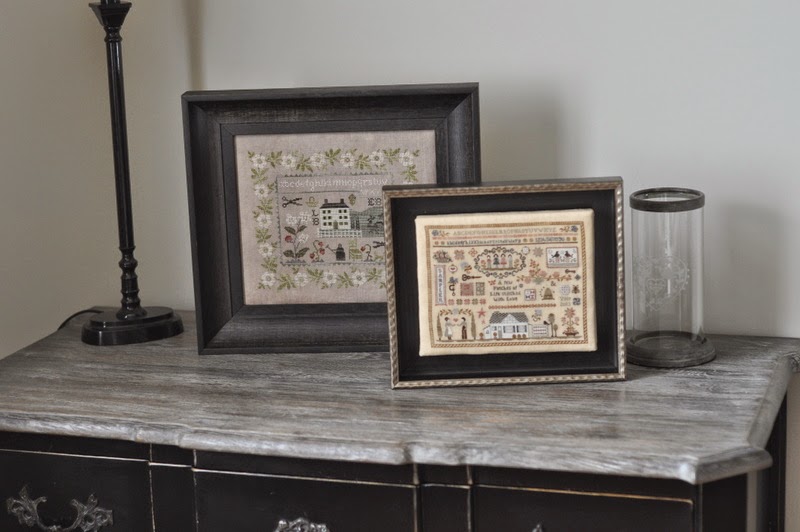 I had the two frames custom-made yesterday but did the mounting myself for the first time with, fortunately, useful advice from a friend. 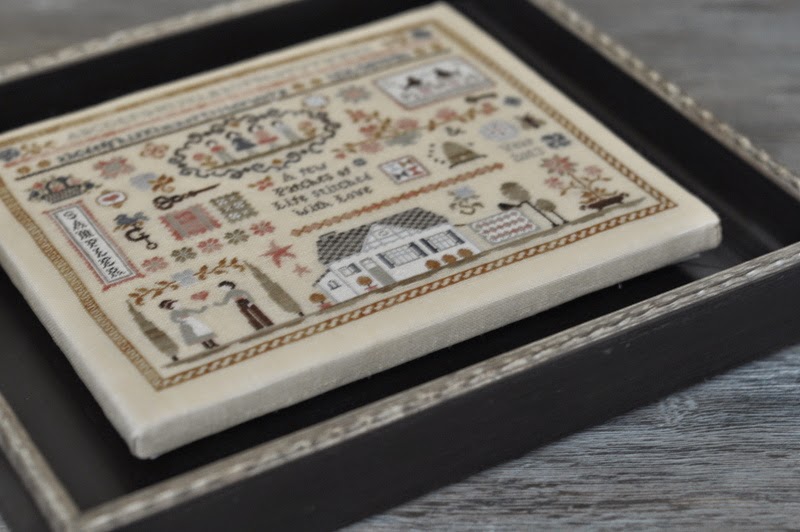 
This is my last finish for 2014. A Stacy Nash sampler called Tribute to Summer Sampler. When I first saw it, I immediately fell in love with the soft colors, the border and the red berries which enlighten the sampler. 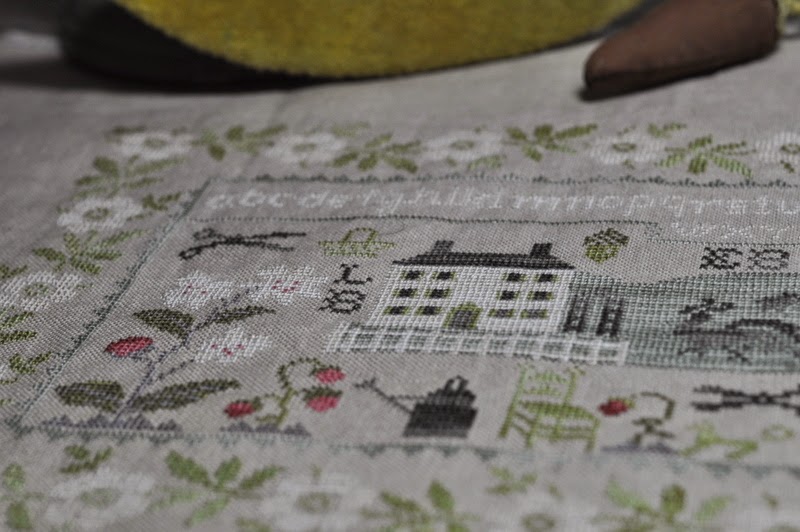 So I decided to stitch this sampler with silk threads on 40-count hand-dyed linen and  ordered the pattern, silk and linen at The Attic Needlework in Mesa, Arizona. Jean made the color conversion for silks and her choice is perfect. I only made one change, the grassy area, because I didn't get enough contrast and the animals were barely visible.

I also made this sampler very personal in stitching my two daughters' initials on it. 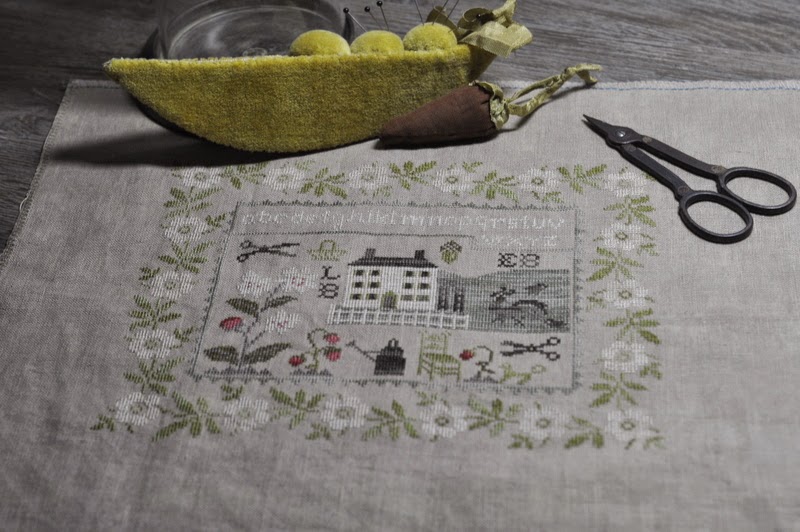 This is a good way to end this year which has been difficult in many ways. I am now ready for 2015 which will hopefully be better than 2014.

I want to thank you all for your visits, comments and interest in my stitching and quilting.

This is the name of the beautiful sampler designed by Nataliejo of L'Atelier Perdu. It took me a while to stitch it.

It will be a heirloom in my collection, for sure. I love it! 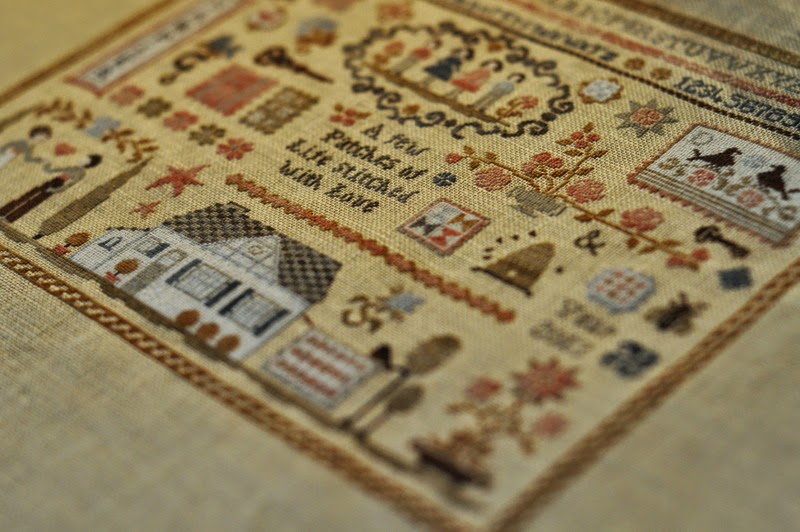 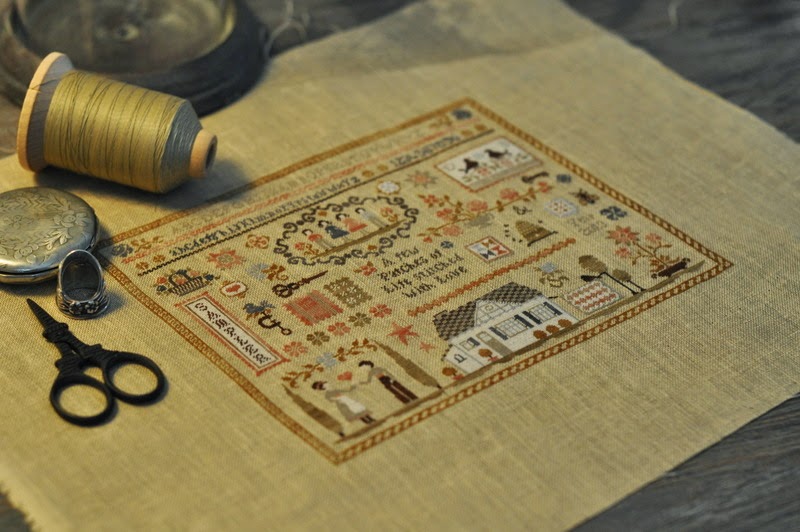 I wish you all a Merry Christmas,
Until later,
Posted by David at 1:09 AM 19 comments:

When two quilters and stitchers come over for a weekend, we do our own show-and-tell, talk about threads, fabrics, designers and inspiration. We enjoy some good food and good wine and revel in the pleasure of some time off the real world.

Needless to say that I have been impressed by the beauties they both brought along with them :-)

We had also decided to make a simple project as a memory of these two special days.


We picked up the Think-Of-Me Heart Sewing Case project from Maggie Bonanomi's latest book Thistle Down Moon. To tell you the truth, it was not as easy as it was supposed to be because working with vevelt can be challenging!!

Here is my version and I like it a lot. A perfect match in style with the velvet peapod pincushion. 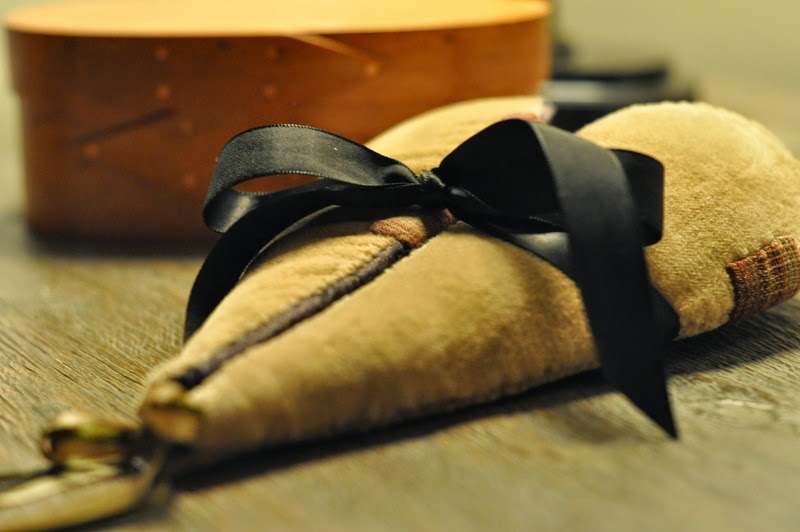 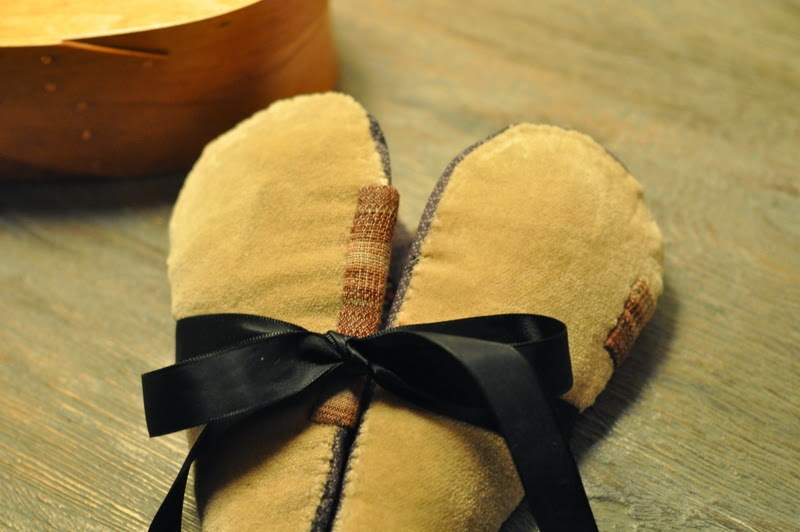 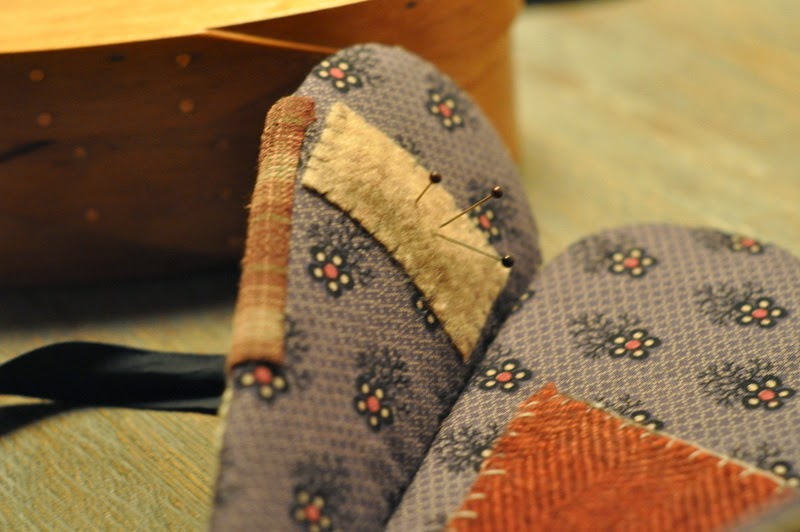 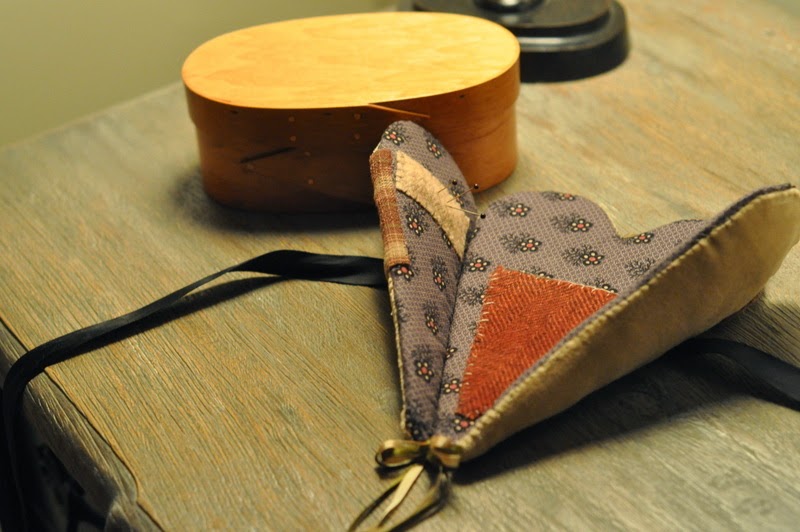 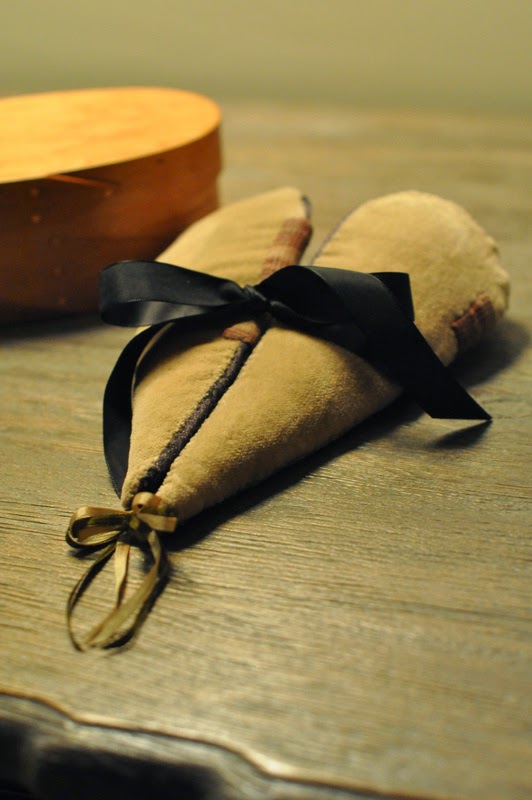 Whatever the place on earth you live in, whatever the season you are enjoying right now, I wish you all a happy holiday season.

David
I'm 50, I'm married and I have two daughters. I live in Gascony, South West France. I love quilting, stitching, cooking and travelling.I am always trying to find beauty in the smallest things that surround me.

Subscribe to David's cottage down the hill. by Email 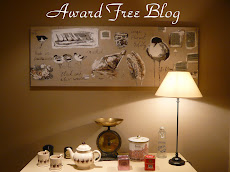