on June 20, 2013
A while ago, I told you that in May or June I would be ready to share with you a project I started in November. 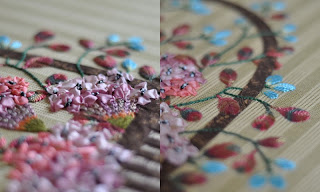 This project is The Basket, a creation of Nathalie Méance, also know as La Fée Pirouette. It is published in her new book. (click on the picture of the book to flip through the  projects in it)

It was so great that another weekend retreat was organized two weeks ago with Cécile Franconie from Facile Cécile. You can have a glimpse of it here ;-)

So....what's left to be done on the basket ? Not much as far as the embroidery is concerned. Just a few beads to add. Then I will start piecing the top this afternoon which shouldn't be too long. But the yoyos will take some time.... well, I'd better go and work on the quilt now, as I told La Blonde that I will have finished it before going on vacation this summer.

Mrs Jeux De Fils is the first in the group to have  finished the project... a while ago... and OMG!!! this is beautiful!

PS : You may have noticed that I activated the code for comments again. I do know this is annoying, but I had so many spams to delete each day that I turned it on again. Sorry about the inconvenience.
Edit : No more codes to avoid the "don't-want-to-spend-too-much-time-trying-to-figure-out-what-this-damn-code-is"!!! but have not allowed anonymous comments instead. Hope this is going to be the best solution, both for you and me ;-) 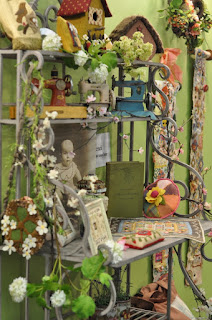 The quilt show was, this year again, fantastic. There are many more things I could have shared with you.  If my photos were not  blurred, I would have shared the Mountmellick exhibition. There were so many different versions of the same quilt.  I paid special attention to the handquilting for inspiration. I was happy to meet Di Ford this year again. My Mountmellick is now finished and waiting its turn to be quilted. I will now start Pendlehill and why not attend a class with Di next year? I could have showed you the extraodinary boutis of Kumiko Geraerts if I had taken enough photos for a good report. But I am sure that if you browse the net, you will find photos. Odille Bailloeul "Sourisville" exhibition was extraordinary too! Brian Haggard's universe is very special and though I am not sensible to all his creations there were a few that I found really special. It took me time to publish these few posts because I have spent all my (little) spare time quilting